Get your hands on it: Download (and get the Pro version! It's now free!): earth.google.com

A little background on it: The story of Google Earth actually starts with a network of satellites. In the 1970s, the US government used a set of satellites known as "Keyhole" satellites to scan sections of the Earth's surface. The image below (from Wikipedia) shows an illustration of the Keyhole satellites circa 2013 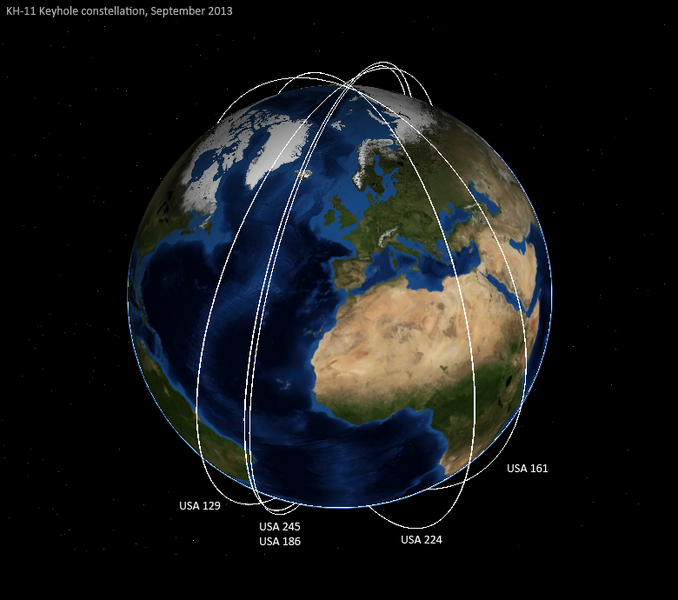 This data was typically used for intelligence purposes (e.g., tracking construction activity in the Soviet Union or its client states). Starting in 2001, this data was eventually bundled (along with aerial photographs and GIS data) into a dynamic globe by a company called Keyhole, Inc. Google bought this company in 2004, and released the dynamic globe to the public in 2005.

As someone who had spent 10 years teaching K-12 social studies, this was revolutionary. Rather than grapple with a pull-down map or a desktop globe, I could zoom in anywhere on the globe, add layers of data, create my own custom markup, screen-shot out my own custom maps...I had just been handed the keys to the cartographic kingdom.

Since 2005, Google Earth has stayed relatively stable. New features have been added, but nothing has been taken away. Unfortunately, I don't know that this project is viable in the longterm; Google has not made money off the product, and the future of mapping is probably more mobile and app-based and less client-side, computer-based, full-featured installs. Still, Google Earth is a great technology and I hope it sticks around.

(I will get a little deeper into this later, but Google Earth does exist on mobile platforms such as the iPad...and it's not great–it's nothing like the computer-based version. I don't know that it will ever become more powerful on a mobile device, either – but stay tuned.)

Getting to know the software as an end-user: Google Earth (and other geospatial software) does not have the same grammar as the productivity software that you're probably used to (e.g., word processors, slideware, spreadsheets). True, there is a File menu, an Edit menu, a View menu, etc. The way it works with data, however, is very different, and even the layout of the features is different. 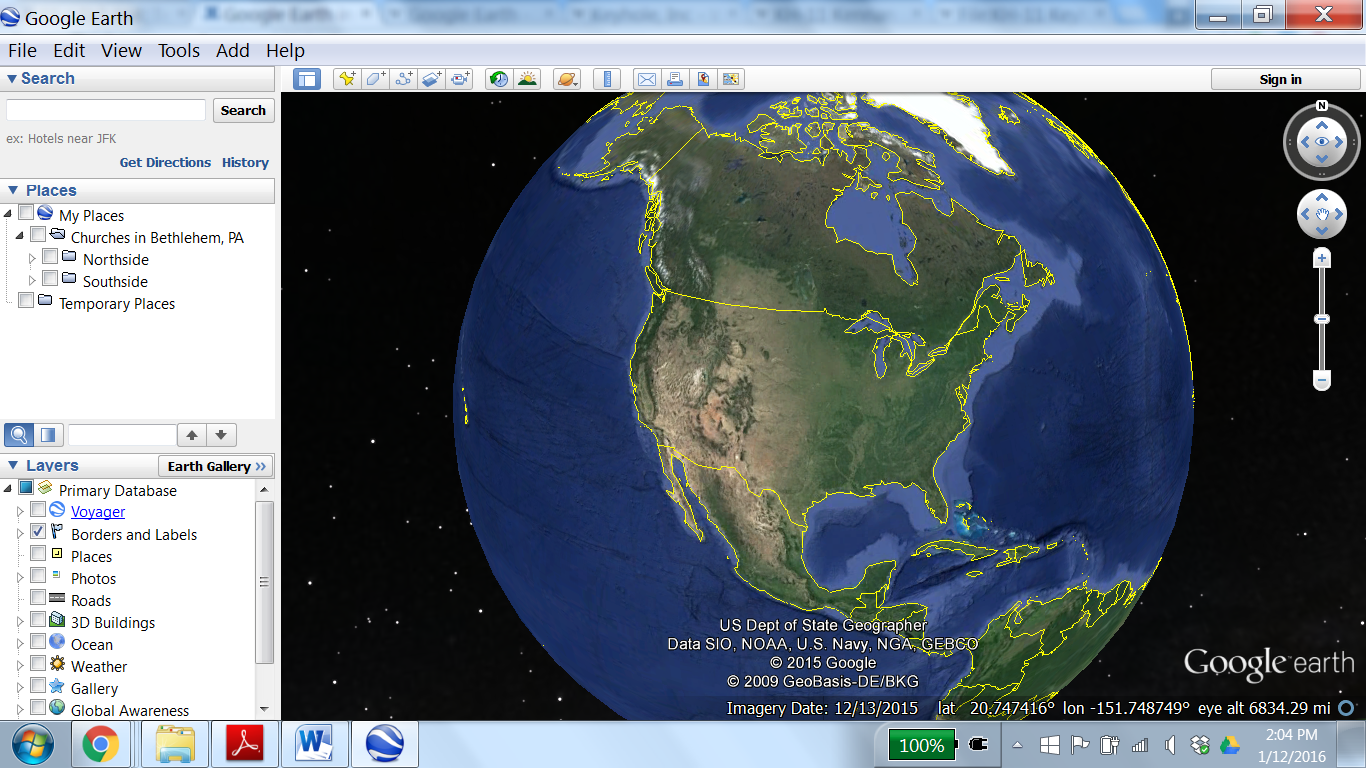 I have a heuristic for exploring geospatial tools: LINIQES. This stands for Load, Interface, Navigation, Inquiry, Query, Edit, and Save. (There's sometimes an Organize step between Edit and Save or a Share step after Save. But LINIQEOSS just sounds crazy....)

You load Google Earth like anything else: Launch it from your Applications list or Programs folder. One thing to keep in mind is that it needs an Internet connection to function–it loads data from Google's servers and sends queries back there.

Next, let's look at the interface. I divide it into four regions, abstracted in the diagram below.

Let's start at the top left: the Search box. This is basically the Google search engine – type something in and the software sends your request back to Google's server farms andgives you a set of hits. Instead of the hits appearing in a list on a webpage, they're appearing as a list under the Search box and on the map.

Advice: To be honest, I don't use the Search feature except as a navigation shortcut – more on that later.

Next, let's look at the lower left. This is the Layers list. These are datasets that Google has hooked into Google Earth. Some are user-generated (e.g., the Photos and Places layers include user-generated content), others come from GIS datasets (e.g., borders or roads), some were built by Google (much of the 3-D layer comes from their Street View vans, I believe), and some come from specialized archives that have given Google access (e.g., David Rumsey's historical map collection). All you can do is turn things on and off here; you don't own it and can't edit it.

Advice: TURN OFF ALL LAYERS, then add in only the layers you need. Students can be overwhelmed by Google Earth, and if you have fifty different datasets being displayed, it makes things worse.

In between Search and Layer is "Places"...but I call it My stuff. This is where data that I create gets listed, or data that someone else made but I can load it and control it. This is where I do most of my work.

Navigation in Google Earth can happen lots of ways. (This will be true for other geospatial tools, too....) I use a combo of the following. 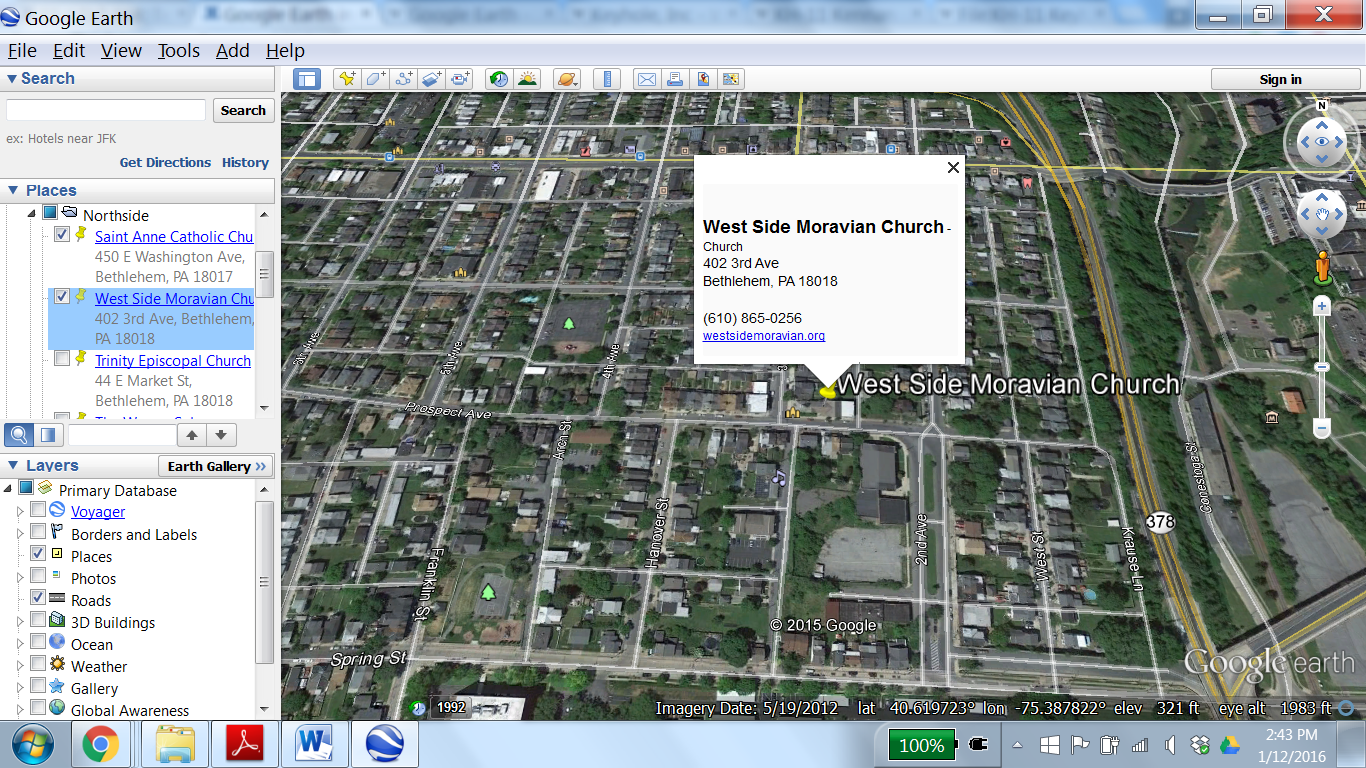 Inquiry: What's that feature on a map? In general, click on a piece of markup, and you get a pop-up balloon. (See image to the right.) This does not necessarily apply, however, to features in the Layers – click on a street name, and it won't give you a pop-up. Click on a Place (e.g., look for  the tree at the corner of Spring St. and Franklin St.) and it will give you a name as a tooltip or pop-up (Higbee Park).

Query: This is where you ask questions about the data and the software gives you answers. The only official queries you can run in Google Earth are Searches...which is just the tip of the iceberg. We will get more into this when we address GIS, but just know that Google Earth is pretty limited with Queries. Google Earth is GREAT for looking, BAD for analyzing (querying).

Edit: Adding and editing markup in Google Earth is not terribly hard...but it's counter-intuitive and requires some training. You can add markup (e.g.,  points, lines, polygons, overlays) in several ways 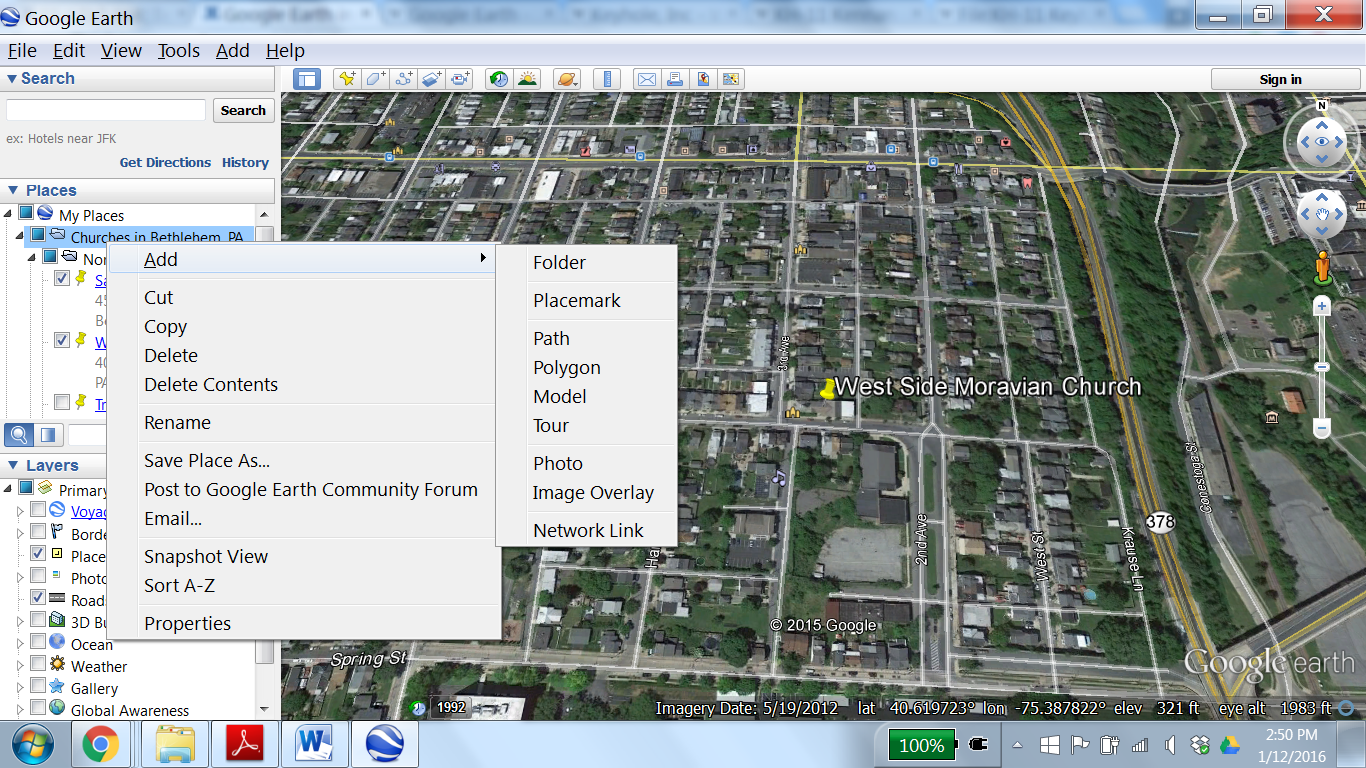 Things you can add include

However, adding features is the easy bit...the hard bit is editing the features after you've added them. Let's say that you've placed a pushpin and now you want to adjust its placement, or re-color it, or pick a different icon, or change the label or caption. How do you do that??

This is it...the big secret...you have to right-click (or control-click) and select "Properties" (or "Get Info") – THEN the item is back into its editable state.

Very few people figure this out on their own. This single, highly counter-intuitive aspect of the software is a serious dividing line between those who use Google Earth to look at stuff (99% of users) versus those who use Google Earth to build stuff (the 1%). Congratulations, you are now part of the Illuminati. Promise to use your powers for good and not for evil. Impress your friends, but don't warp their spirits and raid their bank accounts.

Advice: Folders are your friend. Organize features into folders (and/or sub-folders!!) and your life will be better. I promise.

Save: This is another counter-intuitive area, but it works the same way as the editing: You have to think to right-click or control-click. Look at the image above–see the option for "Save Place As"? That's the the key – giving that command saves whatever you've clicked on (a placemark or a folder or whatever) into an external file. You can then re-access this file later or mail it to a friend (or instructor!). In fact, if you use the "Delete" command, the external file will still be there!

What does Google Earth data look like? Google Earth saves its data as either .kml (Keyhole Markup Language – see here for an example of what this looks like; you might have to download the file and then open it in a text editor) or .kmz (Keyhole Markup, Zipped). Kml is a flat, text-only file – it's very small, but it contains no data, just markup. That means any file you have that uses pictures or maps or other media MUST be online and not on your local computer. Kmz, on the other hand, can zip into the file the media that you're using.

Advice: Use the kmz format. I can't imagine a situation in which you would want to have the kml instead. Exception: As of this writing, ArcGIS.com will work with a KML but not a KMZ. If you're making a Google Earth file for the purpose of pushing it into ArcGIS.com, you'll need a KML.

Ready to start marking it up?

An exercise: Make a Google Earth overlay of your "Happy Place". Include a point, a polygon, and a path, plus whatever else you like. Save it into a folder, then send the final .kmz or .kml to Dr. Hammond.